BILLINGS, Mont.-- Montana American Legion Baseball All-State pitcher Hunter Williams struck out eight in a two-hit, complete-game shutout, and right fielder Logan Pailthorpe followed shortstop Preston Fliehman’s RBI single with a two-run single as the Bozeman Bucks scored five runs in the first inning on Sunday, Aug. 9, in the Class AA State Championship game and made them stand up in a 5-0 victory over the Helena Senators at Dehler Park.

After that five-run outburst in the first, Williams and Helena All-Conference pitcher Cy Miller locked horns in a pitchers’ duel. They combined to allow only four more hits and five walks the rest of the way.

The end of the COVID-19 season is upon MALB fans because the national organization cancelled the regional tournaments and World Series. So, the state champion will not be advancing into national play. 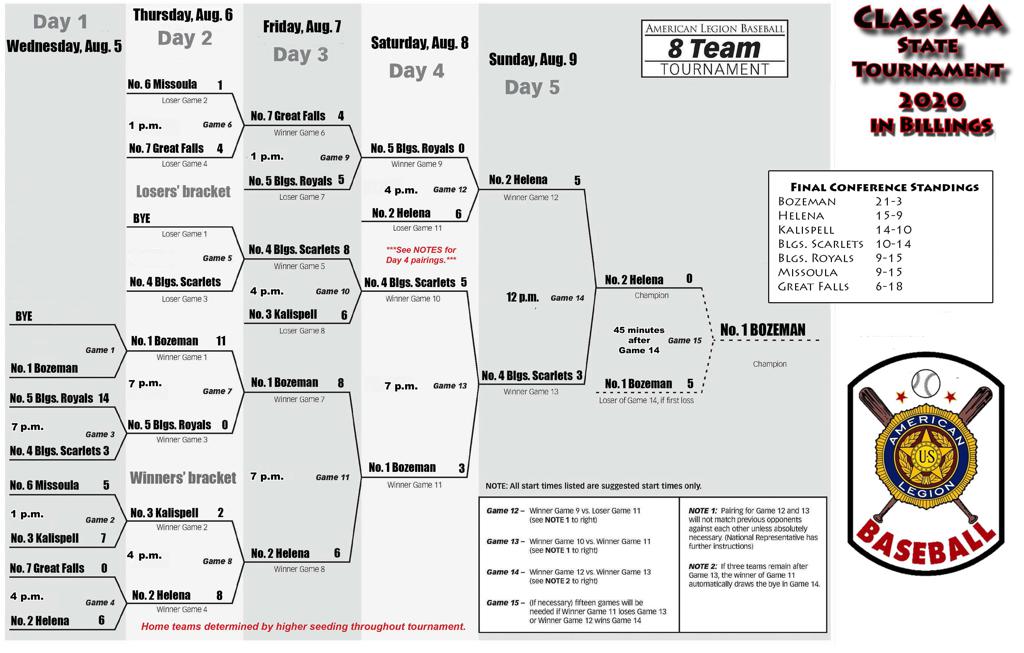 *The 2020 Class AA conference schedule comprised four games with each Class AA opponent in Montana, for a total of 24 games to determine seeds at state tourney; also, home/visitor in all rounds. *Due to COVID-19 restrictions regarding international travel between Canada and the U.S., both Lethbridge and Medicine Hat did not compete in the season.

The No. 1 Bozeman Bucks and No. 2 Helena Senators split a doubleheader on Friday, July 31, in Helena to end the Class AA Montana American Legion Baseball conference season.

While the regular season is over, plans for the state tournament have been put into flux with the local Helena health department waiting until 4:50 p.m. on Friday to inform the Helena Senators that their application to host the state tournament was denied. Officials are working to revise a plan in order to keep Helena as the host; otherwise, the tournament may be moved to Billings. Another option is for higher seeds to host individual games.

Bozeman earned a first-round bye in the state tournament. Helena will play No. 7 Great Falls. Kalispell will play No. 6 Missoula. And the two Billings teams will face off in the No. 4-5 game. Location and game times are still to be determined, pending health restrictions.

BOZEMAN--The Bozeman Bucks swept a four-game series from the Kalispell Lakers to climb to 19-1 on the season and take a firm hold on the No. 1 seed.

Kalispell dropped to 12-10 and third place with two more conference games, both against No. 7 Great Falls, left in the regular season.

The Helena Senators swept Great Falls in a doubleheader to improve to 14-8 and grab on to second place with a week left in the regular season.

After a busy few days to open the week after 4th of July weekend, the Bozeman Bucks remained undefeated in Class AA play, the Kalispell Lakers took 3-of-4 from the Billings Scarlets to take sole possession of second place.

Now, teams are staggered in games behind Bozeman, instead of logjammed. Kalispell remains 1.5 games behind with the Billings Royals (2.5), Helena (3), Missoula (3.5), and the Scarlets (4.5).

The Bozeman Bucks and Kalispell Lakers won both games of doubleheaders against the Billings Scarlets and Great Falls Chargers, respectively, to put themselves atop the tight Class AA standings.

June 24: 6 teams within 1 game of each other atop standings

The Class AA ranks are showing a lot of parity.

After the busiest two-day stretch of the early season, which saw eight games played, six Class AA teams are within one game of each other in the standings.

The Billings Royals and Helena Senators won three of four games over the Missoula Mavs and Kalispell Lakers, respectively, over the last two days.

Now, with between seven and 10 conference games played (with the exception of Bozeman with two), five teams have either four or five wins and are within a game of .500.

There could be some parity in MALB's Class AA ranks this year.

About one-third of the way through the season, Missoula has climbed out to five wins in the 24-game conference schedule to float atop the standings. Bozeman, with only two games in the books, ranks above four teams with either three or four wins in 6-8 games played.

May 21: Montana ALB leads nation in return from COVID-19

After submitting plans of operations to each of their local health departments in early May, Montana American Legion Baseball teams began practicing with the opening of Phase 1 in Montana in early May in response to COVID-19, and with most of American still restricted due to the pandemic, MALB teams opened competitive play in Helena.